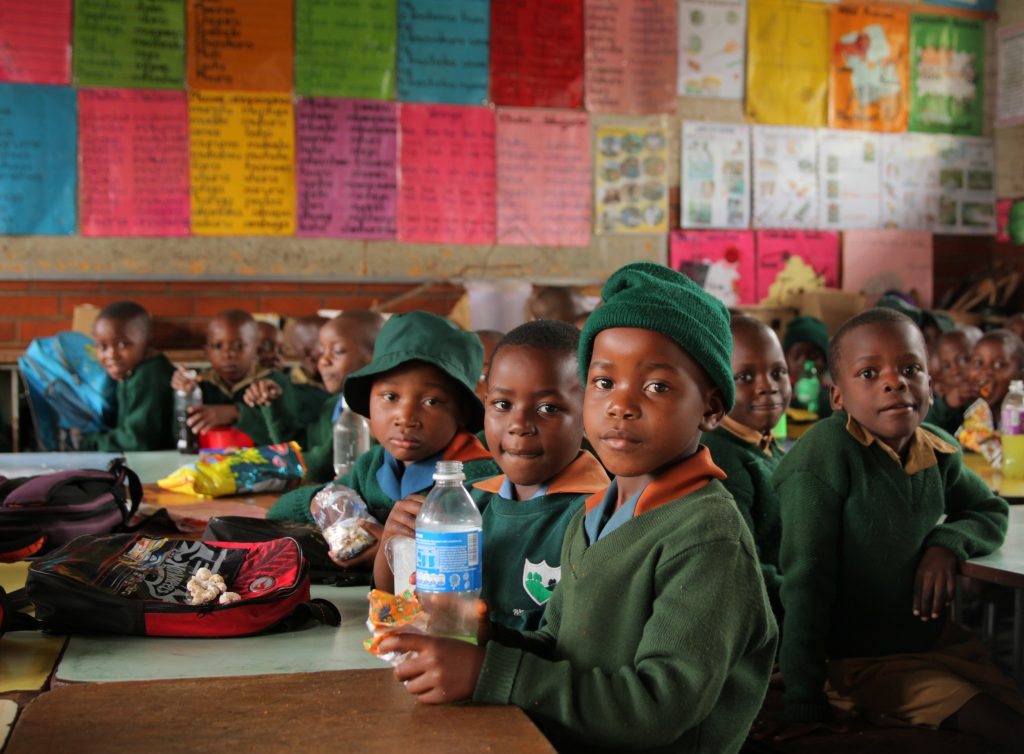 I slowed down on the highway as a stream of school kids skipped and cavorted along the roadside at 9:00 in the morning. Two little boys were showing off, tugging at each other’s rucksacks, playing fighting, tumbling in the grass. In the shade the dew was still thick on the grass, beads of moisture shining like jewels when the sun peeped through the moving shadows.

I waved at the children and they waved back, smiling and calling out “How are you?” all looking so happy, so smart in their khaki uniforms and bright scarlet jerseys.

But nothing is as it seems in Zimbabwe. These children should have been sitting in their classrooms at school 10 days into the belated first school term of the year but so far they’ve learned nothing, and there’s a sad, sad story to explain why.

A month after teachers were arrested and put in leg irons for protesting for a living wage before the school term started, nothing’s gotten better, it got much worse. In response to teachers saying they were incapacitated and needed a return to their salaries of 2018 of US $ 540 a month instead of the paltry equivalent of US $ 80 they are being paid now, the government responded by suspending them for three months without pay.

Unions put the numbers of suspended teachers at 135 000 out of the roughly 140 000 employed in government schools, almost 90% of the teaching workforce.

The president of the Teachers’ Union said:

“No teacher grows money in a garden or receives it like manna from heaven.”

The union said the government is using “thuggery methods” and that they would fight the suspensions in court. But the simple fact is that you do not need a degree to know that when the poverty date line is ZW $ 90 000 a month and a teacher’s salary is ZW $ 20 000, there’s a big, big problem – and when the exchange rate from US dollars to Zimbabwe dollars is set by government at an unrealistically low rate, teachers’ salaries are going down every single month.

One sad story among many

One dad went to his son’s school to find out what was going on and was met with a distressing scene. Most of the children were outside playing in the sun, kicking a football made out of plastic bags, romping in the long grass and splashing each other in the river when they should have been in class.

The teacher was in the classroom but only half the students were there.

“What’s going on here?” he asked the teacher.

He had paid his son’s school fees in advance, paid the mandatory ‘building fund’ levy in advance, bought all the school writing books, uniforms, satchel and shoes, and yet his boy was playing outside.

“We can only teach your son if you pay us,” the teacher said.

“We can not afford to work on the salaries we are being paid by government; we can not afford food for our families or even school fees for our own children. If you want us to teach your son then this is the only way. ”

Parents are having to negotiate deals with teachers or hire private tutors to keep their children learning.

The dad negotiated. He could pay with sugar or cooking oil, with a couple of chickens or a bucket of maize, or he could pay cash. The rate was US $ 2 per child per day and had to be paid in cash to the teacher every day or US $ 10 at the beginning of the week. Once the [‘fee’ for the child is paid] he / she comes into the classroom to learn.

There were 22 children sitting in the classroom, heads down, books open.

There are normally 45 children in his son’s class; the rest were outside playing because they could not afford the US $ 2 a day.

Leaving his son sitting in the classroom the dad left. He’d paid the US $ 10 for this week but already did not know how he would be able to afford it the following week or the one after that or any of the following weeks.

At the end of that day I sat watching the sunset thinking about the kids in their red jerseys on the roadside, about the dad and his boy and about teachers who can not even afford to put a meal on the table every day.

There was a power cut as I sat there. It’s an almost daily occurrence again; without warning the electricity goes off and stays off for hours at a time.

I know it’s going to get worse, much worse as this week the electricity workers announced that they were no longer able to afford to keep going to work.

Their union said its members “no longer have the capacity to report for duty as expected”, citing “incapacitation caused by unbearable economic conditions… without a salary review employees remain too incapacitated to fend for their families and will be left with no choice but to report for duty inconsistently until the matter is resolved ”.

Zimbabwe is spiralling back into the desperate days of 2007/2008 with no hint of empathy or solutions from the country’s leaders.

The sunset soothed the land for a brief time, the sky graduating from shiny yellow to rich gold, bright orange to a warm deep caramel and finally a peaceful apricot glow with delicate pale pink wisps of cloud.

As the moon rose an owl sitting on a branch in a big old Msasa tree called out once before gliding silently off into the darkness. Oh Zimbabwe, such beauty but such pain.

From Warner and Universal scrapping unearned balances to Spotify’s 180 million. subs: This...