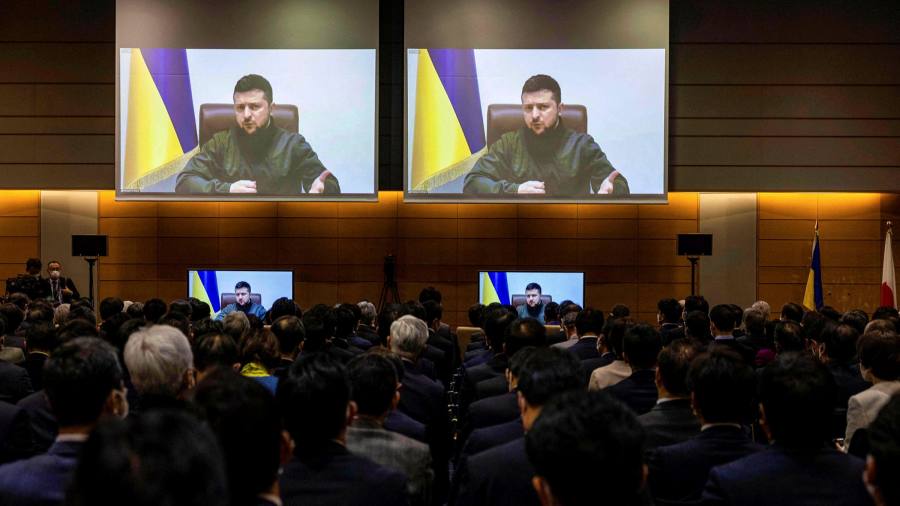 Volodymyr Zelensky hailed his troops for taking back territory from Russian forces as the Ukrainian president welcomed US and European plans to hit Moscow with a fresh round of sanctions this week.

The Ukrainian military has mounted a series of limited counter attacks in recent days, claiming to retake Makariv on the outskirts of the capital Kyiv, as well as pushing back occupying forces around the southern city of Kherson.

In his regular overnight address on Wednesday, Zelensky praised his forces who had “defeated” and dislodged Russian soldiers around Kherson while warning that Russia’s brutal shelling meant there was “nothing left” of Mariupol, a port city that has borne the brunt of the war .

The attempts at a military fightback came ahead of US President Joe Biden’s visit to Europe on Wednesday for a series of summits with NATO, EU and G7 allies aiming to increase support for Kyiv and tighten the financial squeeze on Russia’s economy.

While warning the war “will not end easily or rapidly”, Jake Sullivan, US national security adviser, said the expected measures would include new financial curbs and steps to “crack down on evasion and ensure robust enforcement” of existing sanctions, which are the most punitive ever imposed on a major world economy.

“To do that from one day to the next would mean plunging our country and the whole of Europe into a recession,” he warned. “Hundreds of thousands of jobs would be at risk. Entire branches of industry are on the brink.

“Sanctions must not hit European states harder than Russian leadership,” he added.

Russia denounced reports that the US and its western allies were pushing to expel Russia from the G20 meeting in Indonesia later this year, saying President Vladimir Putin still intended to attend. “Not only G20, many organizations are trying to expel Russia. . . The reaction of the west is absolutely disproportionate, ”said Lyudmila Vorobyova, Russia’s ambassador to Jakarta.

Beset with supply problems, poor logistics and facing stubborn Ukrainian resistance, Russia’s advances have largely come to a standstill in Ukraine, according to western intelligence assessments of the month-long campaign.

Partly as a result of significant losses, one senior US defense official estimated Russia’s troop presence in Ukraine had begun to decline significantly, for the first time falling below 90 per cent of the original 150,000-strong invasion force deployed along Ukraine’s borders.

Biden will arrive in Brussels on Wednesday aiming to use gatherings of NATO, EU and G7 leaders to escalate pressure on Putin. Ukrainian officials said Zelensky was expected to address the NATO gathering by video link and make requests for further military assistance.

Biden will also travel to Poland to visit NATO troops deployed there and meet those involved in managing the humanitarian crisis in which more than 3.5mn civilians have fled Ukraine.

Zelensky said 100,000 civilians remained trapped in Mariupol, enduring “inhumane conditions”. “A complete blockade,” he said. “No food, no water, no medicine. Under constant shelling, under constant bombing. ” Around 7,000 civilians were evacuated on Tuesday, he added.

Russian troops are attempting to grind down resistance in Mariupol to consolidate territory along Ukraine’s coast, but Ukrainian and western officials said the defense of the city continued.

The Pentagon noted there were indications Ukraine was “willing and able” to take back territory from Russia, but the senior defense official did not verify reports of Russian troops being pushed out of Makariv.

Taking control of Makariv would place Ukrainian troops at an important crossroads to the west of Kyiv, allowing them to pressure supply routes to Russian forces.

Russia’s troops over the past week have taken defensive positions within the artillery range of Kyiv and Kharkiv, Ukraine’s biggest cities. Early on Wednesday, Russian forces shelled a shopping mall and other commercial and residential buildings on the outskirts of Kyiv, according to local authorities. They also bombed a bridge over the Desna river that connected Kyiv with Chernihiv, north of the capital, said the regional military administration.

A UK intelligence update on Wednesday noted that while the battlefield across Ukraine remained largely static, Russian forces were “likely conducting a period of reorganization before resuming large-scale offensive operations”.

The UK Ministry of Defense noted Putin’s troops were “attempting to envelop Ukrainian forces in the east of the country” by advancing from the direction of Kharkiv in the north and Mariupol in the south.

Officials in Kyiv have issued further warnings on the “possibility” of troops from neighboring Belarus crossing the border, opening a new front.

Alexander Lukashenko, the authoritarian president of Belarus, has allowed Russia to use his country’s territory to invade Ukraine. In an update on Wednesday, Ukraine’s military noted “the active movement of Russian and Belarusian military equipment and its further accumulation along the Ukrainian border”.

But it added that “a large number of personnel as well as some commanders are refusing to participate in the occupation of [Ukraine]”. While the claim cannot be independently verified, one senior western diplomat in Ukraine said Belarusian generals were reluctant to deploy soldiers who had never fought a war outside its borders. “They know they are poorly trained and equipped,” said one.

WSJ hires USA Today’s Gilbertson to be its travel columnist

Budget 2023: Bold step towards envisioning a prosperous and inclusive India:...