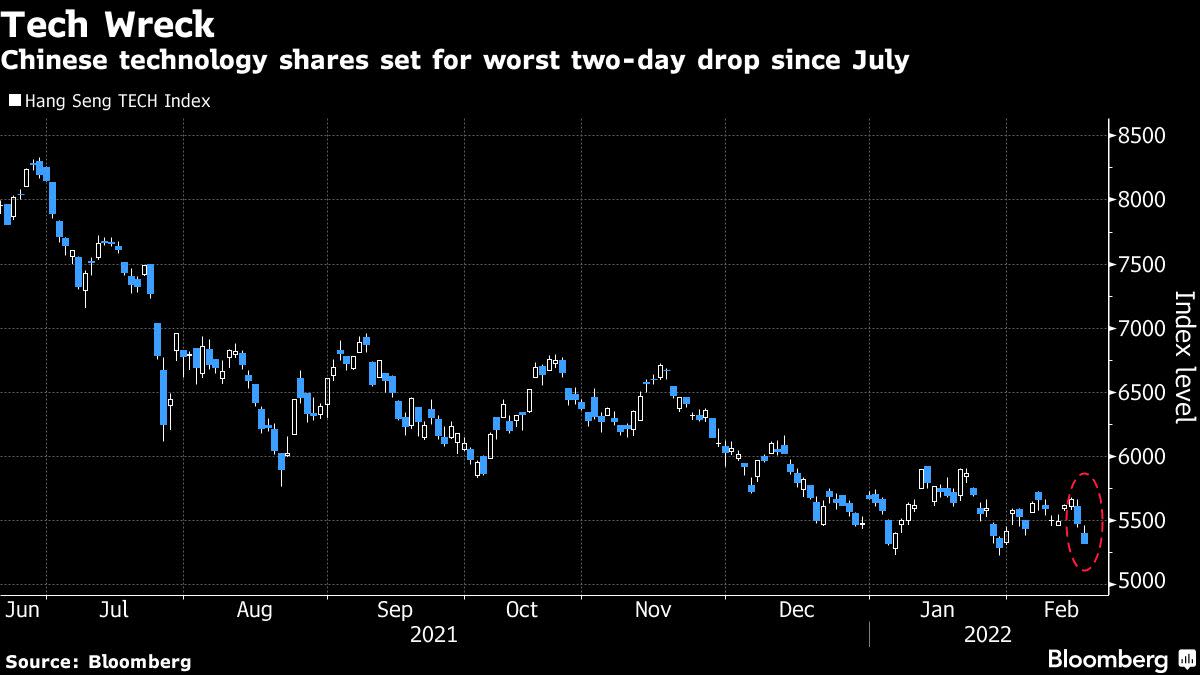 (Bloomberg) – Chinese technology shares slumped for a second session Monday – on course for their worst two-day drop since July – thanks to renewed fears Beijing may roll out more restrictions for private enterprise.

The country’s banking watchdog issued a warning Friday against illegal fund-raising schemes regarding the metaverse concept and an industry association vowed Monday to resist speculative trades in the sector. Neither mentioned any company names. Tencent Holdings Ltd. – China’s pioneer in metaverse development – fell as much as 6.3%. Alibaba Group Holding Ltd. dropped as much as 4.3%.

Hong Kong’s Hang Seng Tech Index, which tracks the biggest Chinese tech firms, was on track to lose over 6% over the two sessions. The decline started Friday when delivery giant Meituan plunged as much as 18% after Beijing rolled out a new policy to curb delivery platform’s service fees.

“There is concern about new regulatory reforms,” ​​said Justin Tang, head of Asian research at United First Partners. “Prior to Meituan, there was a sense of ‘this is it in relation to reforms.’ Investors are now thinking that there could be more to come. ”

China Banking and Insurance Regulatory Commission warned on Friday against fund-raising and investment products related to the metaverse concept, citing the speculative nature of such investments. The metaverse industry body said on Monday that the sector should be developed to serve the real economy.

China’s New Crackdown Shows $ 1.5 Trillion Tech Rout Not Over Yet

Tencent shares have lost 40% since a peak in January last year. The gaming giant, along with peers such as Alibaba and Meituan, were caught in Beijing’s crosshairs as China cracked down on monopolistic behaviors and tightened its grip on user data. The yearlong clampdown has wiped out more than $ 1.5 trillion in market value from the nation’s tech sector.

“The market is very fearful that more crackdown will come and that could leave technology companies very little room to turn around their businesses,” said Castor Pang, head of research at Core Pacific-Yamaichi. “The metaverse fears show that the market is worried that tech firms may not be able to grow a new business rapidly, like how they did in the past in China. That’s really dampening the already fragile sentiment. ”

Investors will find out how far-reaching China’s continued clampdown has been on the profitability of some of the biggest tech firms in the coming weeks as they release earnings. Alibaba will report on Thursday.