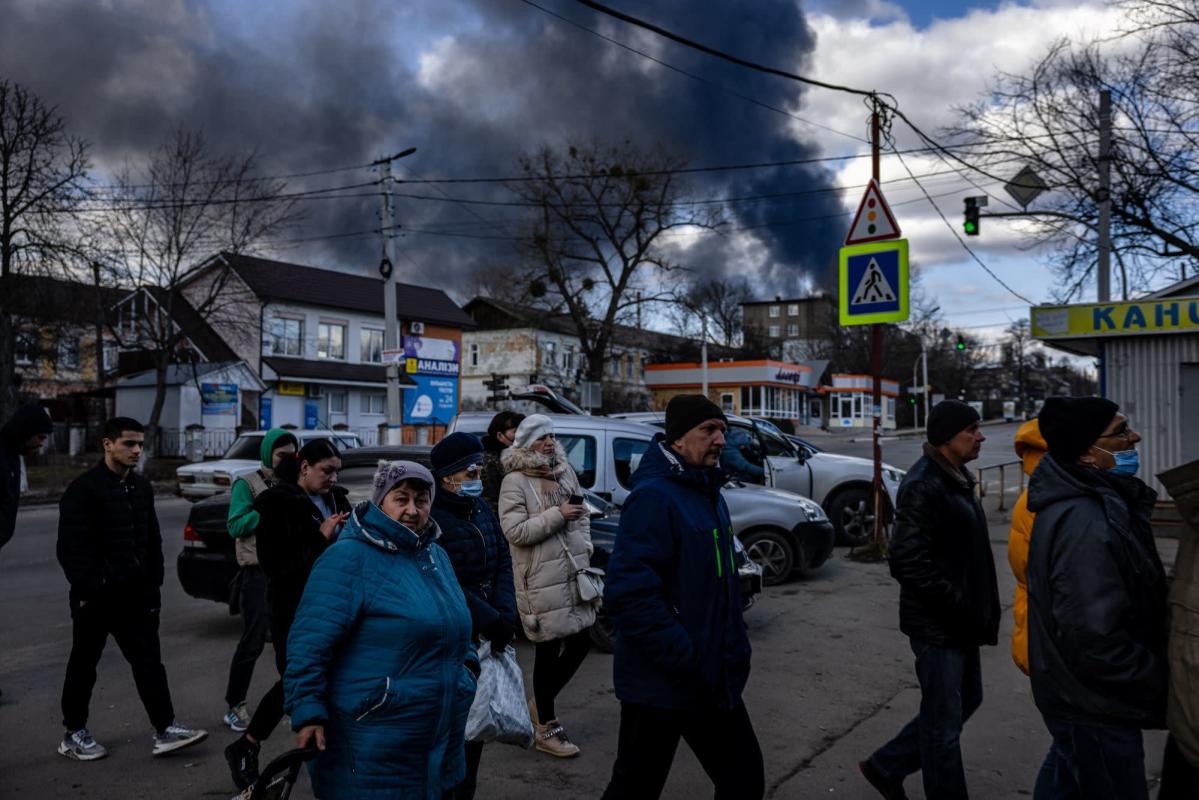 (Bloomberg) – Russia banned airlines from 36 countries from its airspace in retaliation to a similar move from European states, ratcheting up the confrontation with nations that have rushed to punish Moscow for invading Ukraine.

A Ukrainian delegation led by the defense minister began talks with Russian officials on the border with Belarus, while in Kyiv, Ukrainian President Volodymyr Zelenskiy expressed doubt the negotiations could yield progress toward halting the violence and repeated a request for his country to be fast tracked into the European Union.

Meanwhile, Russia’s currency and bonds plunged and authorities scrambled to erect economic defenses against a battery of sanctions launched by the US, the EU, Japan and other countries against Moscow and sent Russian markets into a tailspin. Authorities in Kharkiv said shelling had killed and wounded civilians.

The US and its allies are considering a coordinated release of around 60 million barrels of oil from their stockpiles after Russia’s invasion pushed crude prices above $ 100, according to three people familiar with the matter. While no decisions have been made, the US has been coordinating with International Energy Agency member nations.

Brent oil futures rose 3% on Monday after the latest sanctions raised worries that supply, which is already stretched, will tighten further should Russian flows be disrupted. European natural gas was up 12%, having earlier surged 36%.

Authorities in Ukraine’s second-largest city, Kharkiv, said heavy shelling in residential areas killed and wounded civilians, according to the Ukrainska Pravda website. “It is a war, a real war,” Kharkiv’s mayor, Ihor Terekhov, told Pravda. Clashes took place in multiple locations in the northeastern part of the city, near the Russian border, after Kremlin-led military units entered Kharkiv on Sunday, Pravda said.

Televised footage shared widely on social media showed a barrage of strikes on a residential neighborhood. Fighting also continued in the suburbs of Kyiv, the capital, as well as the northern city of Chernihiv.

Equities fell, sovereign bonds rallied and commodities surged amid heightened uncertainty after a new wave of sanctions against Russia. The ruble lost as much as a third of its value, before regaining some ground to 98.3 per dollar, down 16% on the day, while the cost of insuring the sovereign’s debt signaled a 56% probability of default.

US index futures dropped, alongside European markets. Banks with exposure to Russia led declines, while utilities and defense stocks gained. Oil, natural gas, wheat and palladium jumped, as Brent crude soared on fears of commodity-supply disruptions. Rallies in the dollar, gold and government bonds underlined the demand for havens. The euro fell on worries about risks for Europe’s economy, which relies on Russian energy.

The Swiss government announced it will enforce EU sanctions against hundreds of Russian lawmakers and other officials including Russian President Vladimir Putin and Foreign Minister Sergei Lavrov “with immediate effect.”

Russia Bans Airlines From 36 Countries From Its Airspace (2:30 pm)

Russia banned aircraft from 36 countries from its airspace, including all 27 members of the EU, in retaliation to a similar move from the bloc. The move makes a wide swath of Russia – a key route for travel between Europe and Asian countries such as China, Japan and South Korea – off-limits for carriers including Air France-KLM and Deutsche Lufthansa.

Prime Minister Boris Johnson told the UK cabinet to expect further sanctions on Russia shortly, his spokesman, Max Blain, told reporters in London. The premier is still pushing for Russia to be fully excluded from the SWIFT system of international payments, Blain said. Johnson will speak to the Polish president and Group of Seven leaders later Monday, before heading to Poland and Estonia.

“You can expect us to have further sanctions on individuals and businesses in the coming days and weeks,” Blain said. “We do think that Russia should be cut out not just economically, but culturally as well.”

Blain said the UK estimates that about 100,000 Ukrainians will be eligible to enter the country under plans unveiled by Johnson on Sunday to let in close family members of people already settled in the country.

The US on Monday banned people and companies from doing business with the Bank of Russia, the Russian National Wealth Fund and the Ministry of Finance. The Treasury Department said the actions effectively immobilize any Russian central bank assets held in the US or by US nationals.

Treasury Secretary Janet Yellen said the measures will “target the funds Putin and his inner circle depend on to enable his invasion of Ukraine.”

Russia’s bonds resumed declines. The yield on Russia’s $ 7 billion dollar debt due in 2047 jumped to 8.3% on Monday, doubling from levels seen at the start of February.

Despite an emergency rate hike, investors were focused on the sovereign’s credit-rating downgrade to junk from S&P Global Ratings, sanctions on the central bank and the exclusion of some Russian banks from SWIFT – all of which raised concern that the banking system will get further choked up and the country’s access to sovereign-debt funding will dry up.

The government in Paris will scrutinize all financial assets – including real estate, yachts, luxury vehicles – that may belong to wealthy Russians targeted by EU sanctions, French Finance Minister Bruno Le Maire said after a cabinet meeting in Paris. French authorities will be able to seize the property, he said.

Several Russian media outlets, including the state-run Tass news agency and Forbes Russia magazine, displayed messages calling on the people of Russia to stop the war in Ukraine when the sites were accessed by Bloomberg News reporters in Russia. Forbes Russia confirmed to Bloomberg News that its website had been hacked.

Kommersant newspaper’s site also appeared to have been compromised but later was accessible.

Over the weekend at least one government agency confirmed its website came under a DDoS attack, while several other official websites appeared to suffer similar disruptions.

EU Says Would Be Dangerous for Belarus to Become Nuclear State (1:08 pm)

A referendum to grant Belarus the status of a nuclear country is “very dangerous,” because it would mean Russia could position its nuclear weapons inside Belarus, EU foreign policy chief Josep Borrell said.

Prime Minister Fumio Kishida said his administration will restrict trading with the Russian central bank, the Kyodo news service reported. Kishida said he had spoken with Zelenskiy and that Belarusian President Alexander Lukashenko would also be subject to Japanese sanctions.

The number of people fleeing Ukraine since Russia’s invasion began has crossed the half-million point, Filippo Grandi, the United Nations high commissioner for refugees, said on Twitter. UN agencies said last week the figure could climb to as many as 4 million.

Most of those have crossed into the EU, where the four member states bordering Ukraine have registered a surge in arrivals. Poland recorded the most at 281,000 since Feb. 24, while Hungarian officials have counted 85,400. Romania puts the number of Ukrainian citizens crossing into the country at 70,000. Slovakia had taken in as many as 35,000 as of Sunday.

Singapore’s government will impose unilateral sanctions against Russia, a move which a former diplomat said was the first time in decades that the city-state was penalizing a foreign nation without United Nations Security Council backing.

Singapore plans to impose export controls on items that can be used as weapons “to inflict harm or to subjugate the Ukrainians,” Foreign Minister Vivian Balakrishnan said. Singapore’s biggest banks are also restricting trade financing for Russian raw materials, including on Russian oil and liquefied natural gas, according to people familiar with the situation.

Ukraine Asks EU to Accept its Membership Bid (10:51 am)

Zelenskiy asked the EU to immediately accept Ukraine into the bloc. “I am sure it is fair. I am sure we deserve this. I am sure that all this is possible, ”he told reporters at a briefing at the presidential office.

Accession to the EU is a long and arduous process, which requires the candidate country to adopt established EU law as well as to enact reforms – including to its judicial and economic systems – to meet the bloc’s criteria. The move also requires the unanimous approval of all EU members, the European Commission and the European Parliament as well as the representatives of all existing member states.

Croatia was the last country to join the EU. It applied for membership in 2003 and was granted it in 2013.

EU Can Survive Without Russian Gas Next Winter (10:05 am)

The European Union is capable of getting through next winter without imports of Russian natural gas while avoiding serious damage to its economy, according to a new report by Belgium-based think tank Bruegel.

The 27-nation bloc would need to curtail its demand by at least 10% -15% should Russia halt imports altogether following its attack on Ukraine, a transit country for gas flowing to the EU, the researchers said.

EU Could Survive Without Russian Gas Next Winter, Study Says

Airbnb Inc. is offering free short-term housing for up to 100,000 Ukrainian refugees who are fleeing the Russian invasion of their country and will work with neighboring European states to provide long-term stays.

Leaders from the San Francisco-based company, including Chief Executive Officer Brian Chesky, wrote to the governments of Poland, Romania, Germany and Hungary offering support for housing refugees, according to a statement from Airbnb. The housing will be funded by the company, donors and hosts on the platform.