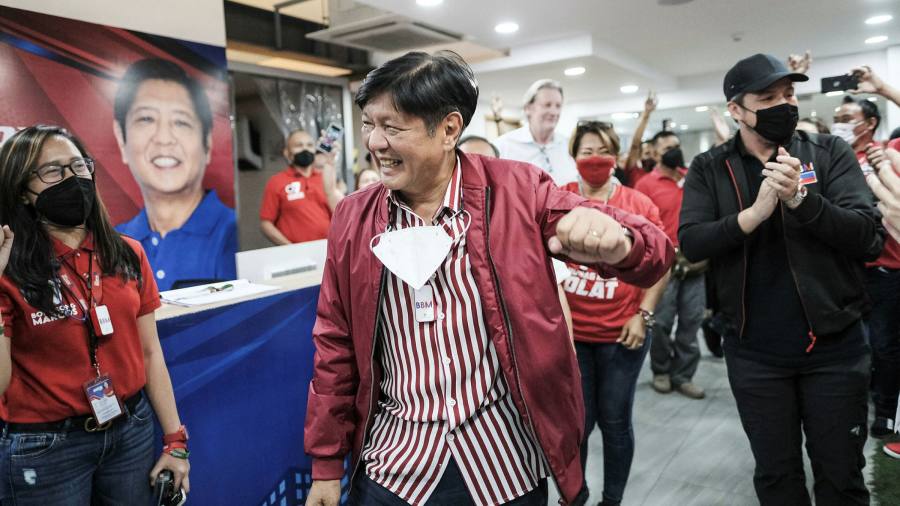 A video posted in 2020 on YouTube claims the French astrologer Nostradamus predicted the outcome of this week’s presidential election in the Philippines.

“Ferdinand ‘Bongbong’ Marcos Jr. is destined by fate and prepared by time to continue his father’s great plan for the Maharlika country,” the Tagalog-language film claims, referring to the Philippine’s pre-colonial warrior class. “He is the most qualified to become the president of the country.”

While no record exists for such a prophecy, this week Marcos won a landslide victory in an election likely to entrench the power of two families seen by many as bywords for authoritarian rule.

Marcos is now set to follow in the footsteps of his late father, the dictator Ferdinand Marcos. And when he is sworn in for a six-year term in July, he will do so alongside vice-presidential running mate Sara Duterte, daughter of the departing populist head of state Rodrigo Duterte, whose term has been marked by reversals in democratic accountability and human rights.

Analysts said Marcos’s comeback to the Malacañang Palace, which his family fled by helicopter in 1986 in the face of a “People Power” revolt, was helped by a carefully curated campaign of online disinformation and revisionism aimed at whitewashing his father’s dictatorship.

However, they said other factors played important roles in his victory, including the family’s powerful regional political networks and the decision of Duterte’s daughter to run with him.

“The Marcos-Duterte ticket running together was very strong,” said Sheila Coronel, a professor at Columbia Journalism School. “Separately they would have competed for votes and not so easily won public office.”

While the Marcoses’ political base is in Ilocos, northern Luzon, the Dutertes are from Davao on southern Mindanao island, where daughter and father both rose from local politics to the national stage.

Leni Robredo, the presidential candidate representing the liberal political camp that dominated the immediate post-Marcos years, won fewer than half the votes of Marcos Jr.

“We now have an entire generation joining the voting population who only saw the austerity of resuscitating our economy after the Marcos years, and not the crisis years triggered by the dictatorship,” said Ronald Mendoza, dean of Manila’s Ateneo School of Government.

The Marcos family’s comeback has been decades in the making. When they returned from exile in Hawaii in 1991 after the death of the late dictator, they were shunned by much of the Manila establishment.

Imelda Marcos failed in a presidential bid the following year, but won a congressional seat in 1995. The younger Marcos and his sister Imee first entered local politics in Ilocos, then won seats in the national Congress.

Meanwhile, a parallel effort began putting a spin on the late Marcos’s rule, which had been marked by repression and economic crisis. The campaign was aided by what researchers said was co-ordinated online promotion of false historical narratives.

“They have been playing this long game, and part of it was filling in information voids about the martial law period, which history books do not evaluate much,” said Jonathan Corpus Ong, associate professor of global digital media at the University of Massachusetts. “Marcos folklore was seeded on social media and they waited for it to get traction.”

Ong said an early example came in 2015, when what he called “architects of network disinformation” used hashtags and posts to garner support for Marcos’ reburial with state honors. After Duterte took power, he ordered the state dictator reinterred in Manila’s Heroes’ Cemetery.

Marcos Jr. narrowly lost to Robredo for the vice-presidency in the 2016 national election. But the groundwork was being laid for this year’s run in a country where 82 per cent of people use social media and most get their news from it, according to research consultancy Datareportal.

After being criticized for their role as tools helping Duterte win the last election and suppress opponents, Facebook, Twitter, and Google as well as newcomer TikTok all said they took steps this year to support election integrity and control the dissemination of false information.

However, films in the style of newscasts, repainting the Marcos dictatorship as a golden age, remain prevalent online. Some claim the Marcos family, whose prosecutors say profited from billions of dollars’ worth of ill-gotten gains, in fact earned their wealth from gold, or that the Philippines was one of Asia’s “strongest and most admired countries” during the dictatorship.

“There is a lot of false nostalgia about the martial law years – that they were golden years for the economy and for Philippine society,” said Mendoza. “They were not: research provides facts and evidence to set the record straight that those years were horrible for human rights and miserable for the economy.”

Filipinos are now asking what kind of President Marcos Jr. will be. His plans, including any for the management of what before Covid-19 was one of south-east Asia’s fastest-growing economies, are largely a mystery, as he did not join Robredo or other candidates in debates.

Duterte has lashed out at leading oligarchs, tangled with the US over human rights and a military pact and led a largely unsuccessful pivot toward China, but analysts expect his successor to pursue smoother relations with both business and diplomatic partners.

Much of the Philippine business elite backed Robredo, but Marcos is – like Duterte – likely to put technocrats in top economic posts.

Duterte did not visit the US during his presidency, but his daughter did in 2020 on a leadership program sponsored by the state department, a possible harbinger of smoother relations with the Philippines’ treaty ally.

“Duterte’s departure will remove baggage in the US-Philippine relationship,” said Peter Mumford, Southeast Asia analyst with Eurasia Group. “While it’s not the ideal outcome Washington would have wished, both it and Beijing will be broadly happy.”

At Close of Business: Bread, Borders and Berejiklian

US formally determines Russia has committed war crimes in Ukraine