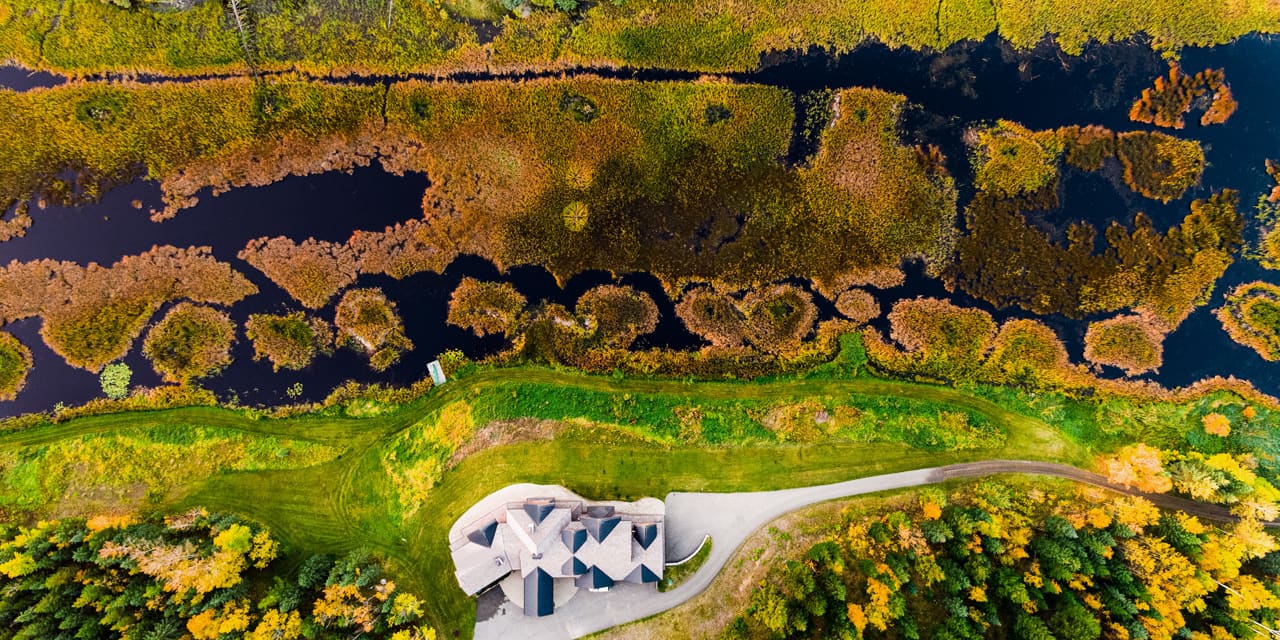 Listing of the Day

The owner, a Canadian mining executive, built the ranch as “a labor of love,” said Faith Wilson of Faith Wilson / Christie’s International Real Estate, the listing agent. “He was staying at a B&B in this area for a business trip, and asked the innkeeper if there was any land for sale. The innkeeper happened to be a realtor, and the owner bought his first parcel. ”

On that lakefront land, the owner commissioned a rustic-luxury, 10,000-square-foot mansion from Sitka Log Homes, a high-end British Columbia homebuilder. As surrounding tracts of land became available, he continued buying them to assemble Four Hearts Ranch.

“There’s a uniqueness in how the owner put together all of these parcels,” Ms. Wilson said. “There’s so much diversity just within the property. You’ve got ranch country, cowboy country, lake country. ”

In the seven-bedroom estate house, a long breezeway off the main entrance offers views through the house that extend to the lake. Since the home is built on a slope, the great room and principal bedrooms are down a flight of stairs. The great room includes a formal dining area, breakfast room, and a living space with a large wood-burning fireplace. A dramatic custom kitchen features black cabinets and fixtures, a large island and bar, plus Thermador and Kenmore Elite appliances. The home has geothermal heating, “which saves energy and cuts down on bills,” Ms. Wilson said.

“There are so many experiences you can have on this property throughout the year,” Ms. Wilson said. Summer activities include wildlife-viewing trails, camping, fishing, swimming and canoeing. In winter, the property accommodates cross-country skiing, snowmobiling, snowshoeing and ice fishing. In spring and fall, the ranch becomes a temporary home for wildlife, including moose, cougars, bears, ducks, geese and migratory birds, Ms. Wilson said.

The ranch’s equestrian center is “state of the art,” Ms. Wilson said, with a custom-built riding arena, a round pen, a hay barn, carpenter and mechanical shops, and stables for ten horses. The equestrian center “could host retreats for individuals or companies year-round,” she said. “At one point, the ranch had the largest Morgan horse herd in North America, and they still have four Morgan horses.”

After building the 10,000-square-foot main estate house in 2010, the owner began buying plots of land surrounding his property. By cobbling together 26 land titles, he amassed the nearly 6,000 acres that now make up Four Hearts Ranch. About 2,000 acres are in the Agricultural Land Reserve (ALR), a provincial designation in which agriculture is recognized as the priority use, with farming encouraged and non-agricultural uses restricted. Land within an ALR receives a 50% value exemption for school and hospital taxes, according to British Columbia’s web site.

The ranch is situated at the southern edge of central British Columbia’s mountainous Cariboo-Chilcotin region, which extends nearly 31,000 miles. The region is popular with tourists for its scenery and biodiversity. Hundred Mile House, a town of about 2,000, is about 15 minutes east, “with a golf course, a ski hill, and amenities like grocery and hardware stores,” Ms. Wilson said. A small airport in the Williams Lake community, about 45 minutes north of the property, operates commercial flights. Vancouver, British Columbia’s largest city, is about 283 miles south. “If you want a location that puts you close to everything amazing in British Columbia, this is it,” Ms. Wilson said.

Write to Listing of the Day