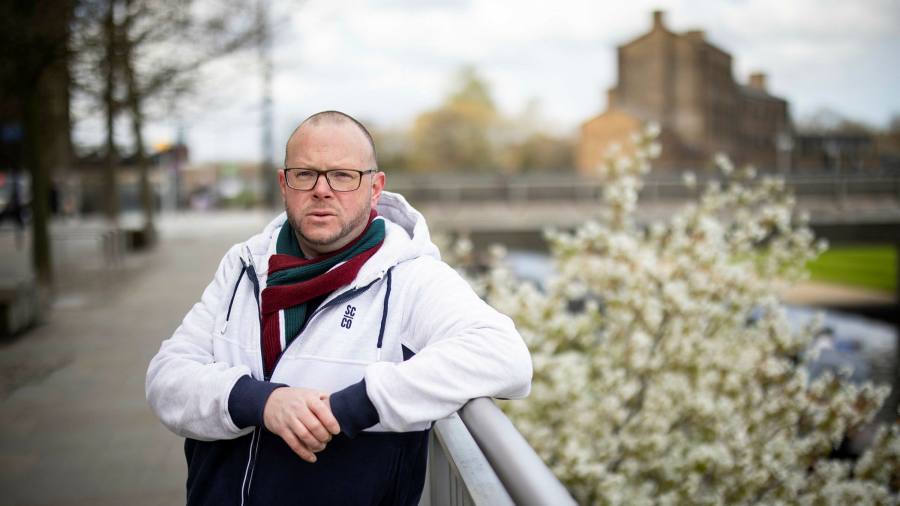 John Lansdown joined P&O Ferries as a 16-year-old apprentice more than 20 years ago, and was working as a sous-chef when he was sacked last month.

Previously a Conservative party member and campaigner for his local councilor in Herne Bay, Kent, he is now the only dissenter taking a stand against his former employer, which fired 800 UK-based crew without consultation.

Lansdown was the only former employee not to enter discussions with P&O as the deadline for accepting its redundancy offer passed on Thursday.

P&O said all but one of the sacked seafarers had either accepted their severance terms – which offered 2.5 weeks ‘pay for every year worked at the company and an extra 13 weeks’ pay for the lack of consultation – or were in talks to do so.

Explaining his decision to refuse the payment, the RMT union member said: “This cannot be allowed to stand because it’ll be a bellwether of the entire UK corporate landscape.

“I’m far from a hard-left activist, just a person trying to make an honest living.”

The severance agreements prevent former workers from talking to the media – staff were told that by doing so they would sacrifice their share of the £ 36.5mn pot P&O has set aside to fund redundancy payments of up to £ 170,000.

But Lansdown was determined to speak out and sue the company. After spending two separate periods working with P&O, he will receive one week’s pay for each year of his eight-year second stint, while former colleagues agree to the enhanced terms walk away with at least £ 15,000.

Several other workers also spoke to the Financial Times anonymously about their sackings and their prospects after P&O.

One, whose role involved ensuring safety aboard the ships, said he had worked for the company his entire career of more than 30 years. After the night shift on a Dover-Calais ferry, he was woken by colleagues on March 17.

He was given 15 minutes to collect his belongings before being escorted to the gangway by security staff, where he was handed a redundancy package. Hands shaking and still half asleep, he said he was “in so much shock I could not even open the envelope. It was like being in a dream. “

Across different boats, the experience was similar. P&O representatives boarded ferries, ticked off names from sheets and read out a scripted message, telling staff the company had made “the very difficult but necessary decision” to fire them.

Off-duty workers heard the message on a pre-recorded video, some receiving their redundancy packages from the delivery service Ecourier, with its bright purple packaging bearing its slogan: “happiness delivered”.

Lansdown said watching agency staff board the Pride of Canterbury while he left was “humiliating”. Some employees that spoke to the FT had yet to receive the belongings they left behind.

Workers at overseas ports described similar scenes. Two British employees fired in Rotterdam said they were bussed to Calais, without food or water for the four-hour journey, and left to arrange transport back to the UK on their own, not returning until after midnight.

P&O did not respond to requests for comment about the individuals’ statements.

Peter Hebblethwaite, its chief executive, last week admitted to breaking the law over the sackings. He has said he ordered the staff changes because P&O was making £ 100mn losses per year and could not survive unless it reduced its costs. The new arrangements would reduce crewing costs by 50 per cent, he told staff.

Despite its heavy losses, P&O agreed to a 3 per cent pay rise for workers in January, bonus payments and better death-in-service benefits. “Why would they do that [if they were in so much trouble]? ” said one of the former workers.

Encouraged by the salary boost, he bought a new car five days before he was sacked. “If they’d given me three months’ notice there’s a lot of money I would not have spent,” he said.

Hebblethwaite told the company’s remaining employees a day after the sackings that the new crewing arrangements would help transform the company from a “good business” to a “golden business”, according to an email seen by the FT.

The agency charged with replacing P & O’s staff, International Ferry Management, has rehired 67 captains and senior crew but most workers are new to P & O’s ships.

The government plans to enforce minimum wages on ferries but for now, P & O’s new staff will receive an average of £ 5.50 an hour.

As this week’s deadline for accepting the P&O severance packages approached, the worker responsible for safety checks said he had felt “blackmailed”, a sentiment echoed by Lansdown.

His payment was almost double his annual salary of nearly £ 40,000, enabling him to pay off his mortgage. But he was concerned it would also place him in the highest tax bracket. “I’m absolutely stuffed for the next year at least.”

After decades at P&O, he now faces precarious agency work with other ferry operators or starting from scratch elsewhere. “That was my life, that job,” he said. “I’m not going to get a job that pays anything like that because I’m not skilled for anything else.”

Another sacked worker who accepted the redundancy package, and is now considering a role in renewable energy, said: “I’ve got a wife and children. What’s been done here is extremely wrong. But when there’s kids involved, I can not afford to take [P&O] on. ”

Saudi Arabia says it has executed 81 convicts in single day

Nasdaq futures slide as Amazon and Apple retreat after earnings