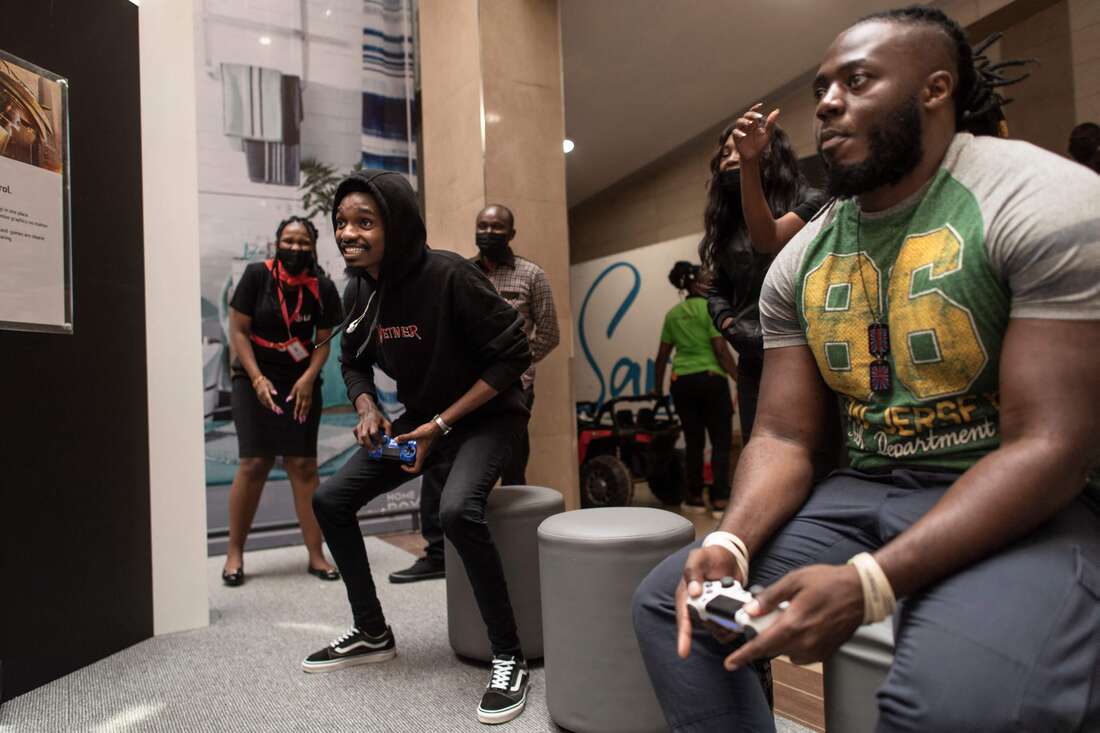 For years, the virtual world of video games was the only place where gamer Brian Diang’a felt safe from his abusive, alcoholic father and their unhappy home in Kibra slum.

“Gaming was my only escape,” Diang’a told AFP, describing a childhood mired in poverty and violence.

Popularly known by his online avatar Beast, the 28-year-old discovered video games when he was nine.

“My dad had become an alcoholic and he would come back home in a drunken stupor and beat up my mom. Home became somewhere I did not want to be. ”

His daily visits to gaming dens worried his mother, who believed they were a bad influence on her son and a distraction from his schoolwork.

“I would receive a beating from my mom every time she found me in these gaming parlors,” Diang’a said.

Far from being a gateway to the world of drugs and crime, his childhood pursuit has instead taken him to tournaments and offered lucrative opportunities to work with tech brands.

Today, he earns around Sh50,000 ($ 430) a month in a country where youth unemployment remains a huge problem.

Diang’a never imagined that his childhood passion could lead to a professional career, until 2013.

“I bumped onto YouTube videos where I saw gamers abroad playing Mortal Kombat – a game that I frequently played to pass time – and getting paid up to $ 5000 to compete,” he said.

So he decided to try and join their ranks.

Diang’a is one of several Kenyan gamers trying to find their feet in a multibillion-dollar industry that is slowly making its way onto international platforms such as the inaugural Commonwealth esports championships, which is expected to feature Kenyan participation.

But they are outliers in a society that has traditionally seen academic performance or exceptional athletic ability as the only route to success.

Sylvia Gathoni, a law graduate, engages in her favorite pursuit, gaming, at her family’s home in Nyeri town on December 10, 2021. PHOTO | AFP

In 2018, Gathoni, who plays Tekken under the name Queen Arrow, became the first Kenyan gamer to be signed by an international team, and is currently contracted to US-based UYU.

“The older generation has been wired to think that to be successful you have to go through a specified path which is – go to school, work hard in your academics and then pursue a particular career,” Gathoni said.

Instead, the 25-year-old has traveled around the world to take part in international tournaments featuring some of the biggest names in the industry including France’s Marie-Laure Norindr, better known as Kayane.

Read: World of e-sports gains prominence one game at a time

But the sector still faces major hurdles in Africa.

The continent has struggled to capitalize on its large youth population – 60 percent of Africans are aged under 25, figures that usually attract sponsors drawn to the prospect of a young, growing fan base.

Many players battle slow internet speeds and time lags compared to their overseas counterparts, who live in developed countries where the vast majority of game servers are located.

Gamers and their dens also encounter police scrutiny in Kenya where the law does not differentiate between esports and gambling.

“In my research, I found that the law needs to catch up with technology – there are a lot of loopholes,” said Gathoni, who hopes to specialize in esports law so she can get involved in policy-making.

Contestants at a gaming session at an exhibition of gaming electronics in Nairobi on October 22, 2021. PHOTO | AFP

Furthermore, while Kenyan gamers regularly meet to play informal tournaments and win cash prizes, the absence of any structure makes it difficult for them to pursue the sport professionally.

“There’s no structure at the moment, it’s simply a group of friends who come together to play,” said tournament organizer Ronny Lusigi.

“For video gaming to transition into esports, it has to be organized and competitive,” he told AFP.

“Gaming kept me sane while everything was falling apart. I want to see more people enter this culture of gaming, ”he said.

Stock Market Gets Boost From Bond Selloff. Time to Sell the Rip?

Is there wisdom in being small?