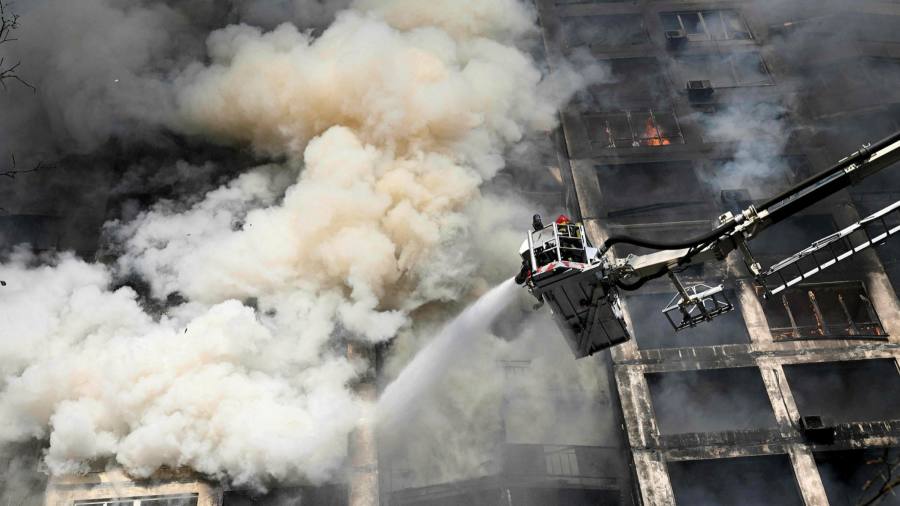 The leaders of three EU countries arrived in Kyiv late on Tuesday in a show of European solidarity even as Russian shelling continued on residential neighborhoods in the Ukrainian capital.

The trip by the prime ministers of Poland, the Czech Republic and Slovenia is the most high-profile visit to the Ukrainian capital since Russia unleashed its war on February 24. Czech prime minister Petr Fiala said the group was traveling as representatives of the European Council and planned to hold talks with Ukrainian President Volodymyr Zelensky.

Separately on Tuesday, NATO said that US President Joe Biden and the leaders of the alliance’s other 29 members would meet next week for an extraordinary summit in Brussels.

“We will address the consequences of Russia’s invasion of Ukraine, our strong support for Ukraine, and further strengthen NATO’s deterrence and defense in response to a new reality for our security,” said Jens Stoltenberg, NATO secretary-general.

EU officials said the visit to Kyiv was not an official mission on behalf of the bloc. The presidents of the European Council and the European Commission were informed about the travel plans last week and pointed to the security risks involved, their spokespeople said.

Michal Dworczyk, a senior aide to Poland’s prime minister Mateusz Morawiecki, said that while Stoltenberg had been informed about the trip, it had “nothing to do with the activities of NATO”.

The announcements came after authorities in Rivne, a western Ukrainian city, said 19 people were killed in a Russian air strike on a television tower. Russian forces also shelled an apartment block in the Svyatoshinsky neighborhood of Kyiv in the early hours of Tuesday, killing at least two people, according to Ukrainian emergency services.

A Russian cruise missile landed in front of a 10-story residential building in Kyiv’s Podil district after being intercepted by a Ukrainian air defense system, a member of Ukraine’s civilian territorial defense forces told a Financial Times reporter at the scene. The explosion shattered windows and damaged balconies, but police said no one was killed or seriously injured.

An update by the Ukrainian general staff said Russia “continues to launch missile and bomb strikes on critical infrastructure” in several cities across Ukraine and in particular was still trying to capture Mariupol, which is completely encircled by Russian forces. Ukrainian military claims could not be independently verified.

A senior US defense official said on Tuesday however that Russian ground forces had made “limited to no progress” in achieving their objectives, adding that they remained about 15km-20km to the north-west and about 20km-30km to the east of Kyiv.

The attacks came on the 20th day of a war that has laid waste to Ukrainian cities and triggered a wave of international sanctions that has left Russia’s economy more isolated than at any time since the end of the cold war.

Aid groups have repeatedly warned of the dire conditions in Mariupol, which has been subject to relentless Russian shelling for more than two weeks. Thousands of people in the besieged city have been forced to live in bomb shelters, deprived of heating, electricity and running water.

Ukrainian authorities said they would undertake a fresh attempt to deliver humanitarian supplies to civilians trapped in Mariupol. A convoy would attempt to break through on Tuesday, and on the way back try to take women and children out, said Iryna Vereshchuk, minister for reintegration.

On Monday, 160 cars left the city in one of the first successful attempts to evacuate civilians from the port since hostilities began.

Zelensky said peace talks with Russia, which ended on Monday without a breakthrough, would continue on Tuesday.

In an address published on Facebook, Zelensky expressed gratitude to Russian civilians who had taken a stance against the war, which has forced 2.8m people to flee Ukraine and left thousands dead.

The Ukrainian president offered his personal thanks to an employee of a state-owned news channel in Moscow who interrupted a live broadcast on Monday night to declare her opposition to the Kremlin’s invasion.

Marina Ovsyannikova, an editor at Channel One, shouted “Stop the war. No to war ”and held a sign that read:“ Do not believe the propaganda. They’re lying to you here. ”

News media in Russia are prohibited from depicting the war in neighboring Ukraine as anything other than a “special military operation” – the term used by the Kremlin to describe the invasion.

Lawyers for Ovsyannikova told Russian media they could not find here. Pavel Chikov, head of the human rights group Agora, said she would likely be charged with a misdemeanor and face a fine of up to Rbs60,000 ($ 538).

A former senior Kremlin official, Arkady Dvorkovich, also joined the condemnations. Dvorkovich, the head of the World Chess Federation and who served as Russian deputy prime minister from 2012-18, told the US magazine Mother Jones: “My thoughts are with Ukrainian civilians.”

He added: “Wars do not just kill priceless lives. Wars kill hopes and aspirations, freeze or destroy relationships and connections. ”

The Russian protests came amid heightened tensions between the US and China over Beijing’s stance on the conflict, which has shaken up the postwar order in Europe and sparked the biggest crisis between Russia and the west since the cold war.

Washington told allies that China had signaled its willingness to provide military assistance to Moscow, including surface-to-air missiles, according to officials familiar with US diplomatic cables on the exchange. Beijing and Moscow have denied the claim that Russia had requested military help from China.

A series of strict sanctions rolled out by the US and its allies have hit equity markets around the world and sent the cost of some commodities, such as oil and wheat, soaring.

Chinese equities have been hit particularly hard. Stocks in China dropped 5 per cent on Tuesday, taking losses for the year close to 20 per cent on the threat of increased tensions between Beijing and the west, as well as the expected negative impact of a Covid-19 outbreak on China’s economy.

State media bombard Russians with alternative version of the truth