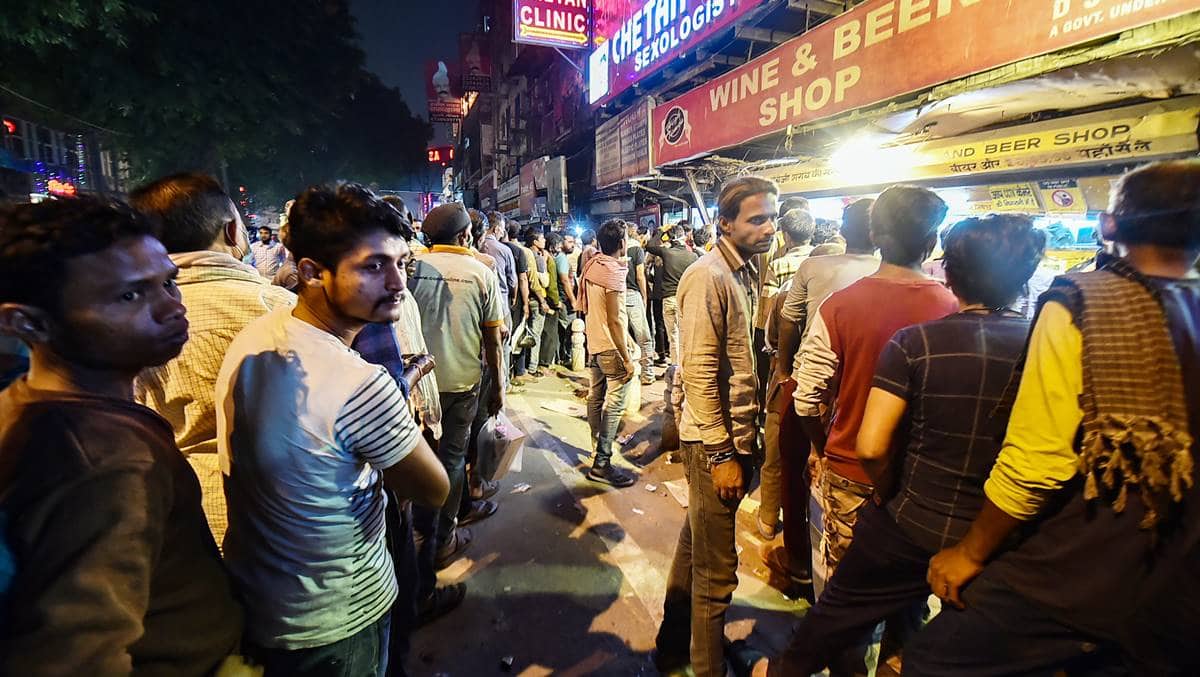 On February 4, the Delhi Disaster Management Authority (DDMA) had eased some restrictions by allowing re-opening of certain activities “but with enhanced enforcement of COVID appropriate behavior”, the department said.

The Delhi government’s Excise Department on Monday warned liquor stores of action for blatantly violating DDMA guidelines for Covid management after long queues of tipplers were witnessed outside these vends to avail discounts on alcohol offered by them.

It also said the liquor stores in the city are required to maintain law and order in and outside their outlets.

The stores, which have L-7Z licenses, are offering discounts on Indian and Foreign liquor to customers through their vends.
Certain instances are being reported where huge crowd is seen in and / or outside the retail liquor vends which are offering Indian and Foreign Made Liquor on discounted prices. In these instances, blatant violation of the DDMA guidelines… has been observed, ”the excise department said.

It said these instances were also in violation of clause 3.4.8 of the tender document which states that “the licensee shall be responsible for maintenance of law and order around their vend”.

However, it has been provided in the policy under clause 4.1.6 (vi) and under clause 3.4.8 of the tender document that the licensee shall be responsible for maintenance of law and order around their vend. In case the vend causes nuisance in the neighborhood and any complaint is received by the Government, the license of that particular vend may be canceled. However, the license fees for the zone will remain the same, ”the department said.

The provision is further supplemented by clause 3.4.11 of the tender document that the compliance of license parameters and maintenance of law and order in the vicinity of his vends shall be an important parameter to decide whether the zonal license would be renewed at the end of year, it said.

On February 4, the Delhi Disaster Management Authority (DDMA) had eased some restrictions by allowing re-opening of certain activities “but with enhanced enforcement of COVID appropriate behavior”, the department said.

“Further, under Rule 20 of The Delhi Excise Rules, 2010, the maximum quantities of intoxicants have been specified that may be sold by retail and possessed exclusively, by an individual not below the age of twenty-five years in Delhi.

“Under Rule 20 (a) of the Delhi Excise Rules, 2010, the individual limit for Indian and Foreign Liquor is specified as nine liters. Therefore, all the L-7Z licensees are forewarned to comply with the DDMA guidelines, clause 3.4.8 of the tender document and Rule 20 of the Delhi Excise Rules, 2010. Any such violation would be considered as breach of Terms & Conditions of the license, ”it said.

“The L-7Z licensee for the reported violations would be identified and action as per clause 3.9 of the tender document, the Delhi Excise Act, 2009 and The Delhi Excise Rules, 2010 would be initiated against them,” it added.

Liquor stores in several areas of Delhi witnessed long queues of tipplers on Saturday as some outlets offered discounts on different brands of alcohol.

Some stores in parts of the city, including Jahangirpuri, Shahdara and Mayur Vihar, offered up to 35 per cent discount on certain IMFL brands.

The new excise policy of the Delhi government came into effect in November last year.

Financial Express is now on Telegram. Click here to join our channel and stay updated with the latest Biz news and updates.

Teva could pay $ 3.6b to settle opioid dispute – report