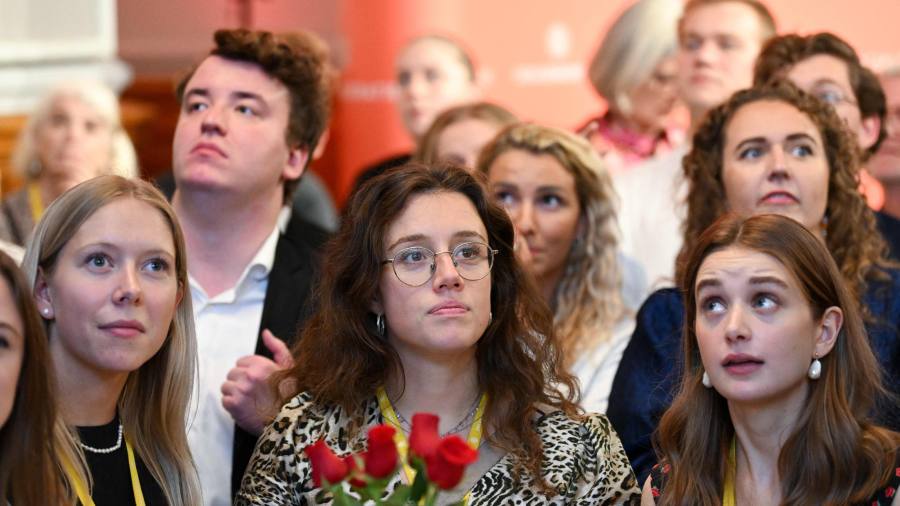 Denmark’s parliamentary elections were balanced on a knife edge with the ruling centre-left prime minister Mette Frederiksen in the lead but with the slimmest of majorities and potentially needing the support of a new party founded by a former centre-right premier to stay in power.

Frederiksen’s left wing bloc has won 87 seats, ahead of 72 for the right wing bloc led by the Liberals. But with three seats from the Faroe Islands and Greenland set to go to the left, Frederiksen was on target for the 90 seats needed for a majority.

If she falls short, she would need the support of a party founded six months ago by her predecessor as prime minister and big rival Lars Løkke Rasmussen. His Moderates party are on course to gain 16 seats, complicating any coalition talks.

Until now, Danish politics has stuck strictly to separate left and right wing blocs that have taken turns in governing. But both Frederiksen and Rasmussen have said they would like to see a centrist government involving the main parties from both the left and right in an attempt to minimize the influence of smaller parties, particularly those on the extremes.

“It could be a new way of doing things. We’ve never had so much talk about this middle ground and finding compromises in the middle. This is a very interesting evening in Danish politics,” former Social Democrat prime minister Helle Thorning-Schmidt told the Financial Times.

Rasmussen declined to say on Tuesday night which side he wanted to see as prime minister but did say that Denmark would have a new government.

Jakob Engel-Schmidt, political head of the Moderates, told the FT that his party wanted a government with both left and right-wing parties. “With the security situation in Europe, the energy crisis, the inflation crisis, we believe that politicians need to come together and make certain reforms that take care of the welfare state for the future,” he added.

Frederiksen is widely regarded as Denmark’s most powerful prime minister and gained plaudits for decisive action during the Covid-19 pandemic. She was forced to call early elections by a parliamentary ally who wanted her to take responsibility for the flawed plan used to kill all of the country’s mink during the pandemic last year.

No fewer than 14 parties have sought entry into parliament and 12 are on target to gain seats — with four more groups likely to come from the Faroe Islands and Greenland — leading to one of the most fragmented political landscapes in Europe.

Experts said it was likely to take longer than normal to form a government due to several new parties emerging, causing fragmentation on both the left and right.

Frederiksen moved the Social Democrats sharply to the right on issues such as migration before the previous elections, which has caused support for the populist Danish People’s party to collapse.

The second most popular party in 2015, when one in five Danes backed them, the Danish People’s party polled only just above the 2 per cent threshold needed to enter parliament this time, its worst result. The main party on the right, the Liberals, the former party of Rasmussen, had its worst result in 34 years, scoring about 13 per cent compared with almost 28 per cent for the Social Democrats.

The Danish People’s party has been usurped by a number of new groups including the New Right and the Denmark Democrats, headed by a former immigration minister, Inger Støjberg who are set to become the fourth-largest party.

The Ultimate Guide to Work-Life Balance

Reflections from the edge of a cliff