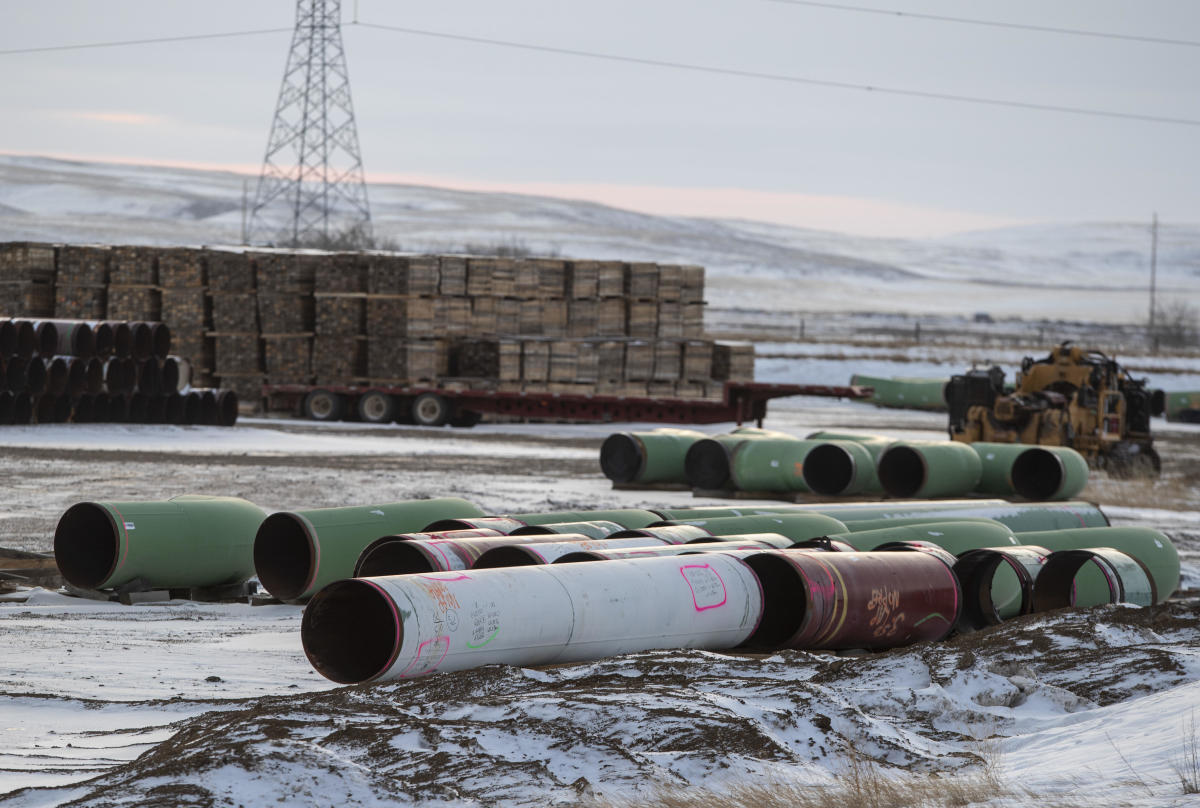 The punishing economic sanctions imposed by the West on Russia for its invasion of Ukraine has roiled global energy markets, with a US ban on Russian oil imports further pushing up gas prices for Americans. Now, GOP leaders are blaming surging fuel costs in part on a decision by President Biden early in his administration to block the Keystone XL Pipeline.

Texas Rep. Dan Crenshaw, who has urged the Biden administration to ramp up domestic oil production, said in a tweet the day before Russia’s February 24 attack that the Keystone project would have produced 830,000 barrels of crude per day.

South Dakota Gov. Kristi Noem went a step further than Crenshaw, writing in a February 24 op-ed for Fox News that in halting the Keystone XL pipeline Mr. Biden was “signaling to the world that American energy independence is no longer a priority.”

“Keystone would have helped ease those fears while giving America the flexibility to counter Russian aggression by expanding energy exports to Europe,” she wrote.

With Americans facing the worst inflation in 40 years, would expanding Keystone offer much relief at the pump?

Root of the problem

It’s important to understand what’s contributing to the high prices of oil in the first place. Gregory Nemet, professor of public affairs at the University of Wisconsin-Madison’s Wisconsin Energy Institute, pointed out that the cost of oil has steadily increased since last fall, when it was around $ 70 a barrel, to more than $ 130 last week before settling back at around $ 100 a barrel on Tuesday. That initial jump in the cost of crude was driven by the ongoing economic recovery, which boosted demand by consumers and businesses that had been dampened by the COVID-19 pandemic.

“A lot more transportation and people flying around, people driving, more demand for oil,” he said. “And supply does not always quickly respond to that kind of shock in demand.”

The war in Ukraine also plays a role, although it was not the instigator of the increase.

“Whenever there is political instability in places that produce a lot of oil, markets react,” Nemet said. “And it’s not necessarily that they’re saying, ‘Oh there’s not enough oil.’ It’s, ‘Oh, there’s a lot more risk now than there was before.’ “

The US imported an average of 209,000 barrels of crude oil per day from Russia in 2021, according to the American Fuel and Petrochemical Manufacturers, as well as 500,000 barrels per day of other petroleum products. This amount makes up 3% of US crude oil imports and about 1% of the crude oil processed in US refineries.

Keystone XL, an expansion of an existing North American pipeline, would have carried 830,000 barrels of crude oil from Alberta, Canada, to Nebraska daily at its peak. At the time Mr. Biden halted its construction, the $ 8 billion expansion was only about 8% complete, according to Reuters.

Yet many experts agree that moving ahead with the pipeline would not have prevented US gas prices from climbing to a record high. Expanding the Keystone would have increased global oil production by less than 1%, an amount, they explained, is “almost negligible.”

“I can see why people make that connection,” Nemet said. “But in terms of gasoline prices and global oil prices, it’s just something it’s better to just ignore because it would have no impact.”

Even if the pipeline was already built, it would not help with the price at the pump, Nemet added, noting that the US has already doubled its oil production over the last 15 years. “And yet, we still have $ 100 per barrel of oil.”

With inflation soaring, gas prices have been increasing for months – hitting an average of $ 4.33 a gallon on March 11, according to AAA.

“The key lesson there is the US is not the whole story here. It’s a global market,” Nemet said. “And so we’ve got 8 billion people that are consuming oil and many countries that are producing it, and it all goes into one market.”

David Kieve, president of advocacy group Environmental Defense Fund Action, also told CBS News that building out the Keystone pipeline would not have softened the impact the Ukraine crisis is having on fuel prices.

Even if the Biden administration were to immediately offer new oil leases to drillers, it would not help with the costs Americans are bearing today. It would take six to 10 years for oil from a new lease to hit the global market, Kieve said.

By contrast, Mr. Biden’s decision with the International Energy Agency to release 30 million barrels of oil from the nation’s Strategic Petroleum Reserve puts downward pressure on gas prices in the short-term, Kieve said. The agency will release a total of 60 million barrels of crude to help ease some of the supply disruptions caused by the war Ukraine.

“You will not see a lot of environmental organizations jumping up and down and saying, ‘Hey, this is the best thing ever,'” Kieve said. “But there is a recognition that those types of actions may have some impact on the prices that Americans are paying at the pump.”

In the long run, the best way to protect Americans from spiking oil prices is to accelerate the shift from fossil fuels to renewable energy, Nemet and Kieve said. Unlike oil, renewable energy relies far less on fixed and limited natural resources. Energy from solar panels, wind turbines and other low-carbon technologies also tends to get cheaper the more widely it is used, they said.

“Instead of having international competition for a scarce resource where everybody wants the oil and there’s a fixed amount of it, it’s different,” Nemet said. “It’s that as we produce more and more of these clean energy technologies … they get more affordable for everyone.”

“We’re all mindful of the pain that Americans are feeling at the pump right now, but the best way to eliminate pain at the pump in the long run is to get rid of the pump altogether,” Kieve said. “Clean energy that we harvest here at home and work to figure out a better way to store is going to power us here at home.”