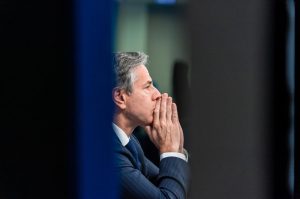 US Secretary of State Antony Blinken accused China of undermining the decades-long status quo that has kept both nations from going to war over Taiwan, saying Beijing was trying to “speed up” its seizure of the island.

“What’s changed is this — a decision by the government in Beijing that that status quo was no longer acceptable, that they wanted to speed up the process by which they would pursue reunification,” Mr. Blinken said Wednesday during an interview at Bloomberg’s offices in Washington.

“They also, I think, made decisions about how they would do that, including exerting more pressure on Taiwan, coercion — making life difficult in a variety of ways on Taiwan in the hopes that that would speed reunification,” Mr. Blinken said.

The latest comments from the top US diplomat rebuking China over Taiwan expand on Mr. Blinken’s argument from last week that China may seize Taiwan on a “much faster timeline” than previously thought. Those remarks caused a stir given the close attention paid to comments from senior US officials about the likelihood of a possible Chinese invasion of Taiwan.

China and Taiwan downplay the likelihood of an invasion anytime soon. On Wednesday, Wellington Koo, secretary-general of Taiwan’s National Security Council, said there were no signs Beijing would start a war in 2023. China’s focus for now was on domestic issues, such as its economic downturn, he said in a TV interview.

In a meeting with reporters in August, China’s ambassador to the US, Qin Gang, said speculation Beijing had moved up a timeline for an attack was “baseless.”

Asked about Mr. Xi’s power play in Beijing, Mr. Blinken said the US was focusing on how to shape the world order around China by strengthening partnerships with allies rather than trying to influence China’s internal dynamics.

On Taiwan, a Chinese diplomat reiterated Wednesday their desire to eventually “reunify” the mainland with the self-ruled island.

“We’re closer than ever in history — and we’re more confident and capable than ever — of realizing national rejuvenation,” Ma Xiaoguang, a spokesman for China’s Taiwan Affairs Office, told a regular news briefing in Beijing. “Similarly, we’re also closer than ever in history — as well as more confident and capable — to realizing the complete reunification of the motherland.”

Taiwan remains the key flash point and the most likely source of conflict between the US and China. Tensions over the island spiked dramatically when House Speaker Nancy Pelosi defied Beijing’s warnings and visited the island in August.

The island, which is claimed by China, receives trillions of dollars in advanced weapons from the US. President Joseph R. Biden has become more explicit than his predecessors about US plans to come to the island’s defense in case of a Chinese invasion.

“Everyone has a very big interest, I think, in making very clear to all involved, starting with Beijing, that the world does not want to see any kind of crisis regarding Taiwan, any kind of disruption, and the world believes that these differences need to be resolved peacefully,” Mr. Blinken said.

More broadly, Mr. Blinken said the US and China were now clearly engaged in a global competition to shape international affairs, with Beijing pushing back against the US to champion an “illiberal” world order.

“We don’t look for conflict. We don’t want a Cold War. We’re not trying to contain or restrain China,” Mr. Blinken said. “But equally, we’re resolute in standing up for our interests, standing up for our values. And again, when it comes to Taiwan, standing up for the proposition that’s held for decades, that these differences need to be managed and resolved peacefully.” — Bloomberg

Energean gas is found in Zeus well west of Karish